Thismorning I heard the familiar sound of my friendly yard-taming slasher's tractor trundling down the street... I only had a long tank-tee top on, no trousers, so I stood under the carport partially out of sight and waved, and he waved, and I waved back, trying to convey "call in on your way back my block needs slashing again!", but I didn't think he got it.
Pulled on some trewes and jumped in the car to pop down the street and see him. We gasbagged for a little while, he's always good for a laugh, he told me that he's had many calls to slash blocks as the council is on the warpath and the grass is growing mad with the rain and hot, sunny days, and he said he'd call in on his way back up the street.

I popped across the street to deliver some empty beer bottles to the neighbour who had made a brew and had some left over which he needed bottles for (his son's come home and has been helping to drink tallies so the neighbour's had to put down some more!). I had nine bottles for him and I grabbed their Chrissie pressies to deliver at the same time. My neighbour, Mr Across The Street told me that he was going to give me the brew he was putting in my bottles! That was a surprise! His Christmas treat from me was some bucks to buy himself some prawns to have a feast - they're pensioners and their budget doesn't run to feasting on prawns. He was in a bit of pain, I don't think they know if it's cancer in his liver where it's come from - he had keyhole surgery during the week and they took a biopsy. He's been having pain in is tummy (base of his sternum) for quite a while. He had a doctor's appointment booked for that afternoon.

As I was gasbagging with Mrs Across The Street the tractor came back up the street so I had to rush out and open the gate - too late! The Mr Slasher and I chatted for a while, then he helped move some large chunks of ironbark onto the woodpile by loading it onto the slasher deck. That would have taken me ages to do and several trips with the two wheel wheelbarrow. He checked down the back in the gully and it was to boggy to slash (too boggy then for me to use the ride on, too), so he only did about 2/3 of the yard. It looks great. Will take a pic tomorrow (it's dark now). When Mr Slasher dropped the wood up on the woodpile he also helped by sawing some branches off a couple of trees which are growing into my place, I don't want to chop them, but they're blocking the way and would hinder the tractor and car access in short time.


When Mr Slasher was leaving I rushed up to save him having to get down and shut the gate, and give him his money. He gave me an extra discount 'cos it's Christmas. Woohoo! We talked about a lot of things. He had a son who died of cancer when he was little, bone cancer, and he was complaining about the doctors around here because he had a sore ankle and was concerned that it might be cancer. The doctor wasn't sympathetic at all and didn't allay his fears, just told him that he'd be wasting the health budget testing/scanning the ankle. Trust me, this doctor is not held in high esteem in the Valley as he's had many failures with patients - some were buried and a some were Christened!

It was midday when Mr S and I were gasbagging at the gate (would that be gatebagging?), and I didn't realise that I was getting burnt. I wasn't in the shade at all. Now I have a sunburnt scalp, red shoulders and a red neck.... oh, my!

Today Son from Across The Street came over and mowed and mowed and snipped and sprayed. The yard and the dogyard is neat again. I just have to spray the grass around the trees that the slasher couldn't cut.

The other day I heard interesting birds out the front. I looked and there were some of the rosellas, a green parrot that you lot can't find in a tree. So I went back inside to get my camera.... and this was what was left hanging out at the birdbath.... 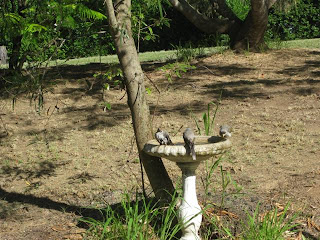 Today I had better luck! Now, how could you possibly miss these birds?﻿ 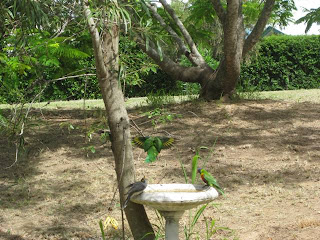 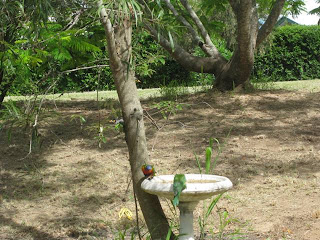 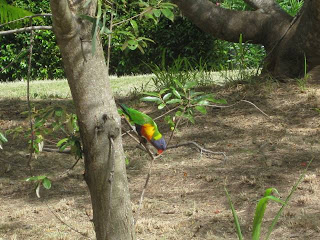 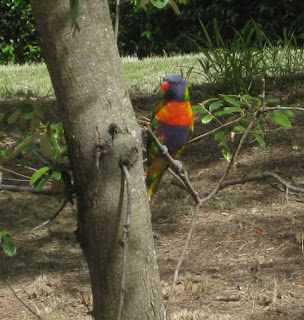 Because it's been so wet (up until now), these critters have been out in force... this one is enormous!

That's enough for now. I has taken me three days to write this and get the photos and I need to get on and do some stuff!
Thrown at the page by kae at 4:16 PM

The frog somehow reminds me of Sen Bob Brown; can't quite decide on the reason though. Not the nose ...

Being a true Redhead, bet you have the fair skin that goes with it?

The yard is looking good Kae, so will now wish you Floyd and Meg, a very Happy New Year.

Bob Brown? You sure it is not Julia with that rear?