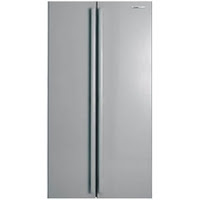 I just got the new-new fridge, and they took the old-new fridge away.
New-new fridge was plugged in and off it went, running like a champion.
Hurrah!
Here is a picture for you. I'm extremely chuffed, looking for a couple of photos of the fridge I found that the fridge is now for sale for $1899 at Hardly Normal* (I only paid about $1299) RRP appears to be $1699 now.
Thank heaven I bought my plasma teev** and the fridge before the prices went up. It's a first for me to have good timing!
You know, that's another thing that I find mildly irritating. Many people ask why I need such a big fridge as I live on my own what could I possibly have that needs to be filling up such a big fridge. Well, I've always bought meat on special and freeze it. Here in Queensland the temperature is high most of the year, there are ants up the wazoo sometimes and so much stuff that you'd store in the pantry in a cooler climate you just have to store in the fridge. Believe me, jam does go off. Flour does get weevily, tomato sauce does ferment. The warmer climate also encourages bugs. Lots and lots of bugs. We have what was identified to me as the cigarette beetle. This beetle is everywhere, and the tenacious little bastards have even been found in dried resin from an Egyptian tomb of Tutankhamun.

They even feed on pyrethrum powder strong enough to kill cockroaches.

* A common nickname for the electrical goods chain Harvey Norman.
**The old CRTV was starting to lose colour.
PS: You know how things seem to happen in threes, particularly houshold appliance failures? Well, I've figured that my score at the moment is: new TV, two new fridges, I shouldn't have any problems with No. 3, as I've already had it...
Update:
3:02 pm
Psst... it's still working!
Thrown at the page by kae at 9:57 AM

Hi Mehaul and Orion
Those pics are just to show how beautiful it is... gee, I need to get a life!

The problem is I'm going from a chest freezer and the old, tiny top-of-fridge freezer to this, and I'm not sure how to put everything in there, silly isn't it!