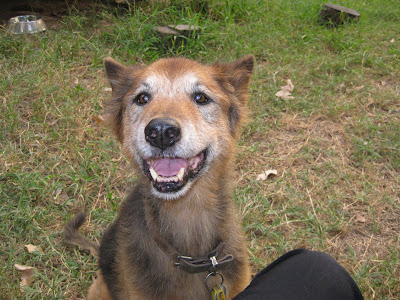 On Tuesday, in the morning, Bundy (the old grey muzzled fellow pictured) and Meggie went to the animal physiotherapy class. They were very well behaved, calm and relaxed. Meggie is a flighty little thing, a nervous nellie and was not very cooperative, until she found where I had the doggie treats. Then she just wouldn't go anywhere.

Bundy behaved very well, and allowed them to do almost anything and everything. He was very cooperative, and not bothered at all by the attention. He has no arthritis and seems to have no pain. The physio said there is a degenerative spinal disease that shepherds get and it looks like Bundy has that, with muscle wasting. I think it's called Degenerative Myelopathy (DM, it’s been likened to MS in humans). Some dogs have been known to show signs of this disease as early as age 5, others as old as 14 years. I’m glad that Bundy seems to have developed this problem and the muscle wasting only in the last 12 months or so. He was clipped in January and I noticed how thin he was, and Meg was fat, so I assumed that she had been gobbling his food as soon as he walked away (she’s a guts, the only doggie guts I’ve ever had, all four of the others have been grazers).

Bundy also shows age related degeneration in his front paws, that’s what I heard from the discussion, his carpals are collapsing. Poor old fellow.

After over an hour with the physios, Bundy and Meg were chauffeured home. They both fell asleep in the back seat, too tired from their big excursion to sit up and look what was going on. Poor little mites!

Getting Bundy out of the car was a bit of a problem, the first time he got into the car he was fine, just jumped up and onto the back seat. Getting out was different. He can’t see the ground (he’s blind), he can see something at about his front paws distant from his face, but further and he can’t see. And you can’t talk to him and reassure him because he’s deaf. Poor old thing. 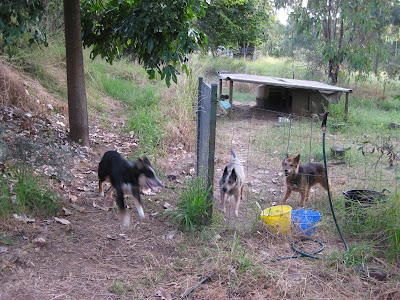 Floyd was very happy when I brought them home. He had been making sooking noises about them going and him not. (The neighbour said he wasn't making too much noise, they didn't notice.)

Floyd has always been a bit shy about getting into the car. He seemed pretty keen on Tuesday, maybe because he saw the others go out and then come back, and he could smell them in the car. He didn’t get impatient in the car (sometimes he would bark and go a bit crazy in the short trip up the valley to the markets!). He was so good for the physio. The lecturer said it was good to see the very old dog, the middle aged dog and Floyd, she remembered Bundy and Meggie from 5 years before when she was doing the course.

Floyd also fell asleep in the car on the way home, but like the kid he is, he fought it! He slept for a few hours in the afternoon, and the next morning he slept in, too. He was very calm that night, not jumping around a lot, just wanted to be close to me. At work there's a building site and it was very noisy with clunking and banging and noises from pneumatic tools and so on, and this really freaked Floyd out, he was freaked out by one noise which we couldn't hear even on the other side of the campus. There's a bloke up the back with an earthmoving business and when he gets home at about half-past-dark there's clunking and banging like the tailgate on his dumptruck banging and clanging. Those noises were freaking Floyd out a little bit. But he was OK today and later last night with the noises.

He learns so quickly! He has trained me that when he puts the knotted rope down at my feet I know to stand on it and he plays tug-o-war, or I grab it and he plays the same game. If I tell him "Leave!" he will let go of the rope. He knows the game is over when I say "Leave!" and then drop the rope toy.

I wrote this last night once, and before I could save it I rested my wrist on the mouse part of the laptop and the whole lot VANISHED!

Another pic of Bundy; looks almost human in grace and wisdom ...

Unfortunately I forgot the camera on the day... I should have taken it there were a few photo opportunities on the day! I think I cheated and this photo was taken earlier this year.
The physio did say that he's travelling very well for his age. Kinda makes me feel good, and yet again, he's not quite himself any more. Because he's blind and deaf he'll smell something on the breeze and stand down the back arfing at it - not a robust bark, either. And in the old days as now with the youngsters, I can call them when they're barking and hush them up. Poor old Bundy can't hear me, or see me properly and so just barks. When I had Bundy, Katie (his sister) and 48 I could get Katie and Bundy to go get 48, if he was asleep in his box (he was deaf and blind, too, when he was about 13). Meggie's not bright enough to realise that she can go get him, perhaps she doesn't want to miss anything?

Yeah, I thought it was the same 'file photo', but it captured a great moment.