Saturday I've (been) volunteered to help the local LNP state people support the candidate - I'll be offering people the material for the LNP.

Open day on Sunday... there'll be a lot of people there as the new Vet School will have tours operating. Here are some photos of a tiny part of the fabulous facilities for the students. 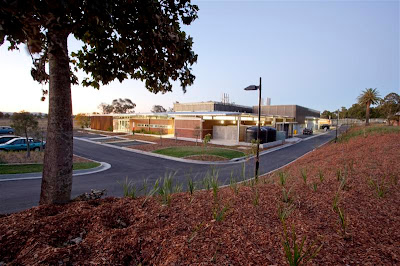 This is the waiting area in the Small Animal Clinic, part of the Veterinary Hospital which specialises in equine surgeries. (By specialises I mean that the surgeries - two of them! - are specifically built for looking after needs of horses... these are on top of other surgeries and rooms with fabulous facilities. Ultrasound, cat-scan, all mod cons!) 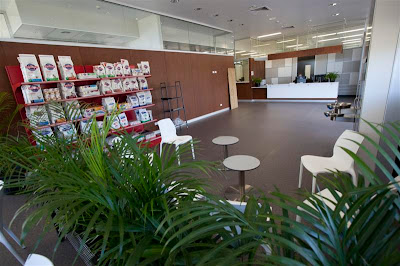 This is a room in the small animal clinic, part of the veterinary hospital. his is where they put the cats. The little condos for the cats have three levels. The bottom level is for food with a little access way to their ensuite. The middle level is the play area. The top level is the sleeping quarters. 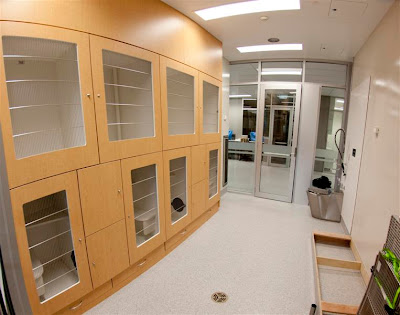 Clinical trials are carried out at the Vet School. Animals are sourced from local pounds and the RSPCA. Animals which come to the Vet School are surrendered or strays which have been judged to have behavioural problems too severe to be rehomed. The Vet School teaches students by showing them how to modify the behaviour of these animals over a period of weeks or months so that they are then suitable for adoption. The animals are also used in clinical trials or things like flea treatments and so on. Animals which are at the start of the process judged to be beyond the point of having their behaviour modified are euthenased and used for dissection and/or surgical practice. The percentage of animals which must be euthenased is quite small, only about 5%. It should be remembered that all these animals have been assessed by the RSPCA and by the local councils as not being suitable for rehoming and under normal circumstances would be euthenased, so remember that 95% of these animals are saved.
The area in the photo below is part of the exercise area of the Clinical Studies facility. I reckon Floyd would love to have a play there, and the fences are high enough that he won't be able to jump over or climb them! 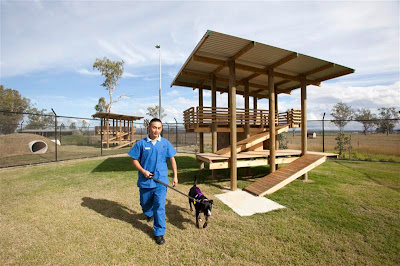 This photograph is taken in the Clinical Studies area. This is the surgery/dissection laboratory. It's amazing the facilities that are now available to the Vet Students. 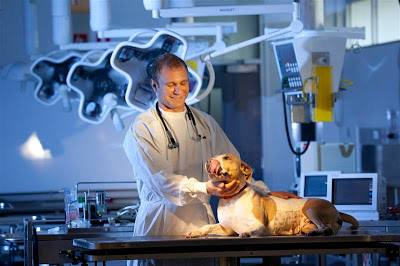 How cute! Where can I get one of them? Nah, not the dog!

Oh, and just so's you know, this new facility, refurbishments of several old buildings, and transformer, the hospital and facilities in the Hospital, the Vet School building and the Clinical Studies Centre cost approximately what the ALP is borrowing every day to keep their head above water.

I think we got the better deal with the infrastructre!

PS: After helping the LNP mob with their handouts at the local polling place there's a bit of a party. I told the woman who asked me to help out that I was hoping it was a "Routing of the Red Ranga" party! She hoped so, too!

The Red Ranga will rock on Saturday i feel it in my water.

I think you're just drowning in debt, Windy!

Hope the week end turns out well for you Kae.
Very impressive Vet school [plus handsome Vet of course].
Still don't know which way the vote will go, but would like to see Abbott win, after the very nasty campaign that has been waged against him.

Actively participating, well done, may the force be with you on saturday. Another three years of wasteful spending by the Ranga would destroy any chance of a better future for at least twenty years. Australia deserves better than failed marxism as a way of life.
Thank you Kae make a difference.