We have a tour this afternoon, an Orientation Tour. Should be interesting. The airline magazine, yourworldofnorfolk.com.au is packed with informatio, so much in there with history and advertisements for shops and eateries, as well as the Norfolk Island Country Music Festival, which is held from 20-27 May 2012.

Our half day orientation tour was excellent. It gave us information on the areas and how the Island was settled. We were taken to Kingston, which was where the penal colony was founded. There are many buildings there which are very interesting. The orientation was mainly from the bus as the weather wasn't the best, windy and showery. We covered all the island (just about!), so it's all a bit of a blur! I did buy Lisle's, the guide, dvd of the tour, so I can refresh my memory later, when I have a dvd player about (I'm using my Acer mini tablet thing which doesn't have a disc drive in it).

First port of call was Kingston township, where the old penal colony was set up (you wanna know dates please lookemup, I can't remember them!) I took a few photos here, but we didn't get out of the bus much and it was very windy so photos were few - it was also not conducive to taking photos as we were in the bus most of the time and had a running commentary on where we were and the historical significance of each area and/or what role it played in the current scheme of things. 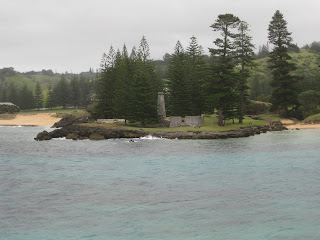 2137 The Salt House - this is where the original penal colony evaporated sea water by boiling it off and collected the salt. This was the main method of preserving meat, particularly for the prisoners.

Near the Salt House are lime pits where the limestone was heated to produce a substance they used for render and mortar. 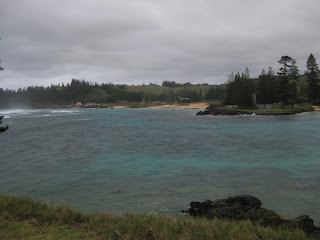 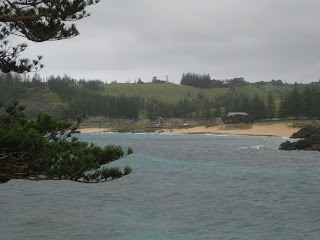 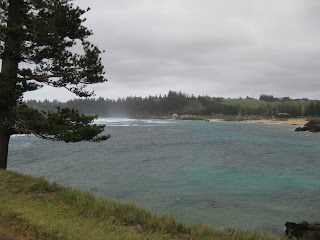 2139 and 2138 and 2140 You can look back from the point near the Salt House and see Kingston pier, the original military buildings, and the main prison buildings across Emily and Slaughter Bays. 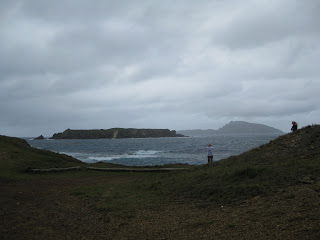 2141 From the point near the Salt House you are close to Philip and Nepean Islands. Nepean is the smaller, close island and Philip the larger, far island. They've just got rid of the feral goats etc on Philip Island, a relic of the penal colony, however the rabbits have taken over.

When the Pitcairn Islanders were told they could have Norfolk Island they were delighted, for in Island culture if you give something to someone it is theirs to do with as they please. Give away, throw away, whatever, the gift is given and is theirs. Unfortunately that's not what was meant when Norfolk Island was given to them as a new home. The Islanders were most put out when Queen Victoria decided that a Missionary of the CofE could have land and set up on NI. Finally the mission moved to another place in the Pacific (I can't look it all up and I just don't remember it, OK, it moved to Honiara in the Solomons in 1919-20), and they packed up everything, lock, stock and barrel, buildings and everything, and took it with them!!!

Unfortunately for them they couldn't pack up St. Barnabas Chapel so it stayed. It is just magnificent. I have the book on the chapel, but there are no coloured photographs in it.

Oh wait, I've found the book bought! It was built for the Melanesian Mission whose school and headquarters were based on Norfolk Island between 1866 and 1920. It was primarily established as a memorial to John Coleridge Patteson who had been ordained as Bishop of Melanesia in 1861. Patteson was topped, martyred, in 1871 in the Solomons when his ship was mistaken for a slaver. Patteson was highly regarded and a sum of money was raised via donations to build a chapel for the Mission College on NI. The Chapel was consecrated on 7 December 1880.

Here are some I took myself... 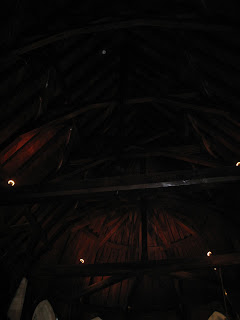 2144 - The roof designed like the keel of a ship, of Norfolk pine treated with whale oil. 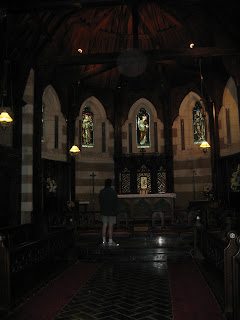 2154 - The altar and the stained glass windows at the front of the Chapel. 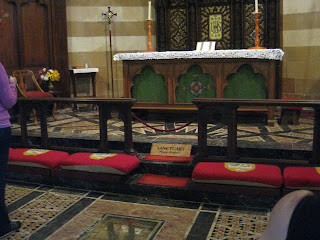 2148 - Detail of the altar - note the floor, inlaid with marble from Torquay in Devonshire, Patteson's home. 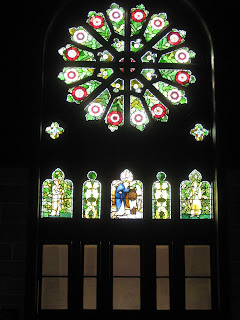 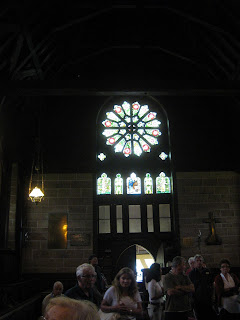 2264 and 2149 - The west window, the Rose Window, produced by the firm William Morris in Surrey, England, restored in 1998. The Rose Window depicts the peace after the end of the War of the Roses. The panels below the rose are to commemorate the five martyred workers, one of them Patteson. Their names are on a brass plaque near the window. 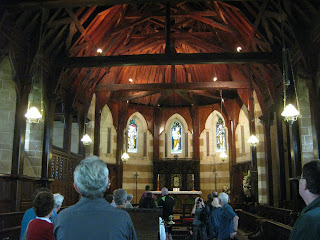 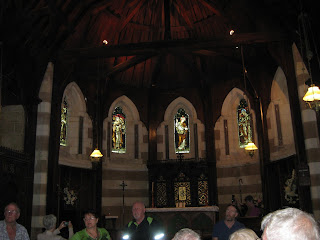 2147 - The east windows (taken without using a flash!) and 2145, depict the four evangelists Matthew, Mark, Luke and John, with Christ in the centre and are the work of Sir Edward Burne­-Jones, a craftsman of the William Morris School. These windows were restored in 1990-91 by Mr Kevin Little of Sydney. (They are protected on the outside with panels of what appears to be perspex, on the Rose Window the panel is visible as it covers the whole window in a large single piece.) 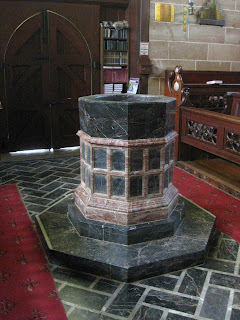 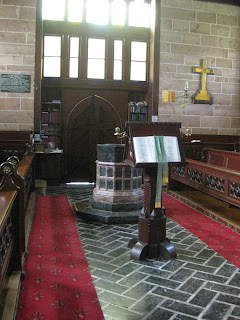 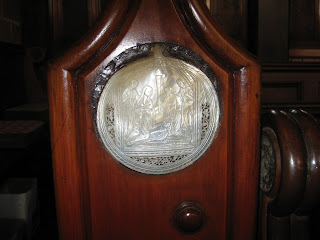 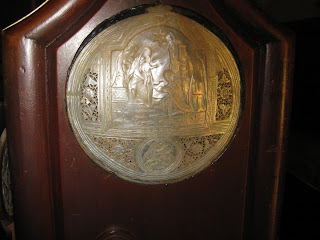 2151 and 2152 - There are beautiful mother of pearl carvings in the pews, these ones of The Nativity are in the masters' pews at the rear of the Chapel. The seating in the Chapel is unusual as the pews face the centre of the church, not the east (front) of the church, this was so that the masters could keep an eye on the behaviour of the students. 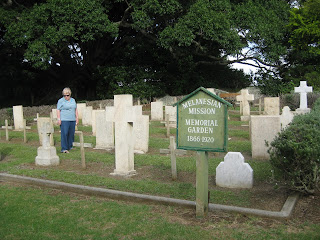 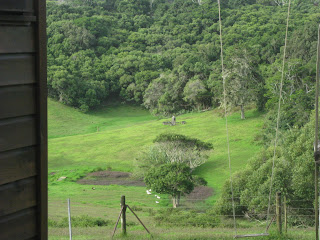 2283 and 2282 Oh, the Mission cemetery. The cemetery is in the valley, you can see it from the Chapel... short walking distance from the Chapel, where mission workers and pupils used to be buried. Eventually it was overgrown and the headstones were damaged by cattle, so the headstones were moved up close to the Chapel. The people are still buried in the old cemetery with no headstones!! A memorial cairn now stands at the site of the original burial ground. 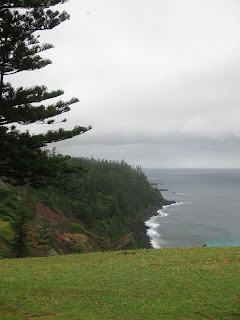 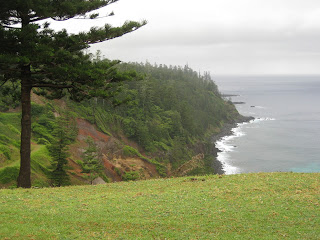 2155 and 2156 - A lookout somewhere significant... sorry, brain is moosh! Okay, I think it's looking from the road back toward Anson Bay (from Puppy's Point/Flat Rock).

Later in the afternoon we had a lesson from a local on the language spoken here, which is a combination of languages and dialects from England, Tahiti and the West Indies. The vowel sounds are different it is a phonic language when you see it written and hear it spoken at the same time you can get the gist of it.

Fromem gehl wi yuusa Taahiishen niem f' fruut ena thing f'iit, en thing wei el duu. From women we use Tahitian names for fruit and things we eat, and the things we all do. (Intesting that the doing words came from the women!)

We were told by one of the guides that whatever food the islanders find they can make a pie with it, and that's the influence of the American whalers. They have a huge harvest celebration on Thanksgiving Day.

Monday night's dinner was pizza from the wood fired pizza place. When ordering pizza always ask whether they use mozzarella cheese. The pizzas were dear and disappointing. A big let down from dinner at the Leagues Club on Sunday night.

Thank you Kae, that was very interesting. Look forward to more.

A fabulous and interesting account Kae - you motivated me to read up Norfolk Island a bit more.

Now - about this "dinner at the Leagues Club." There's a couple of thousand people there. Half would be girlses, 75% of the other half would be too old or too young.

Some of 'em would favour badminton, ten pin bowling or synchronised swimming. Others would be lazy - say 50% all up.

That leaves a maximum 125 possible League players - about 6 teams from Under 5s through first grade to has beens. Who do they play ... at the Kingston Telstra/Optus/Heinz Baked Beans International Stadium? :)

There are about 1,800 people on the island I think.

There'll be more when I can write it and load the photos on the blog.

Hello, I have been visiting your blog. ¡Congratulations for your work, good luck with your blog! I invite you to visit my blogs about literature, philosophy and films:
http://vniversitas.over-blog.es