It's been a while!

The political situation, with Julia's history and the other union intrigues, seem to be well exposed in other blogs around the place so I'm not really going to say anything about that subject right now.

Michael Smith has some good things on his blog and on Facebook if you use that.

Have I told you lately how much I hate the "improvements" to the blogger front end? Well, consider yourself told again!

Work for me at the moment is still very stressful. There are things going on there which I can't talk about, and that makes it worse!

I've taken heaps of photos, but there was a conspiracy against me - when I was ready to download them the camera battery was flat... and I couldn't find the charger. I remembered the last time I had it and realised that it was probably with the electrical bits and pieces I took with me to Sydney/Norfolk Island in January. Sure enough...

Speaking of Norfolk Island, I need to make time to go through the rest of the photos and write up a story for them. That will take me a while. I started on NI, but got sidetracked. I'll do that on separate posts.

Now, what's been happening on the blargle/pet/home front?

Earlier this year there was a bit of action next door. The parents had moved out some time ago and the kids were still living in the house. The kids were four older teenage boys, one with a girlfriend and a baby (he was probably close to 20 if he wasn't already when the baby was born - the baby was about two or three),

For a while, a couple of weekends, I noticed that there seemed to be a bit of action at the house. Things were disappearing froom the yard and out the back and one of them  must have driven a small truck for work which was making a few trips away during the weekends. It looked like they were moving. They'd arrived after a trip around Australia some years ago with a bus which sat rusting in the backyard. They were pretty quiet and didn't bother me. I occasionally heard the dad pitching a fit and yelling at the boys. They always kept the front yard and the yard around the house nice, with all those boys to do the work it wasn't hard! The back of the block, about an acre or so, was fenced off and they hadn't slashed it for years. This was a source of bandicoots for study projects at the university.

Eventually the neighbours and I realised they'd gone. A few weeks later there was action at the house, the tenants had done a runner, owing money, and after damaging the house. All the flyscreens were either damaged or missing. There were holes in the walls.

The owners and a tradesman mate of theirs were working on the house for more than a week. I spoke with them on one occasion and let them know if they needed anything to let me know. (They borrowed a step ladder to do something.)

One afternoon a woman was standing in my driveway and called out a cheery "Hello!".  I looked up and said hello and noticed there were two women, then promptly went back to what I was doing... Then I realised they were coming down the driveway - I was sure my hello wasn't cheery or welcoming. We get a lot of JWs here and others and to be honest they can be really annoying.

Turned out it was the owner of the house next door and one of her prospective new tenants. The new tenant wanted to know how I felt about horses, and whether I'd be open to agistment on my block. She said she'd pay me.

I said, "Well, you'd better come and have a look and see what it looks like..." I said that I'd be fine with the horses on my block (they'd keep the grass down, and the back across the gully hadn't been slashed for over 18 months so it was nice and grassy). I didn't want any money, but I needed for the fences to be kept good. The prospective tenant was quite shocked with the welcome from Floyd and Meg, she said "Do you have dogs? We didn't know you had dogs, we've been working on the house for a over a week and we never knew you had dogs. They didn't bark at us!"

I didn't hear any more until a few weeks later and there was some noise and action next door. A little shadecloth fence went up at the fence line, just around the house yard at the back. Not very big at all. I soon found out why...

They are wildlife carers and usually have something (or two somethings) they are looking after. This is a little wallaby. They had two but they're long gone, up to the range for pre-release living with a group of other wallabies. This one would be about, er, eighteen inches tall. Sorry, I can't remember their names. 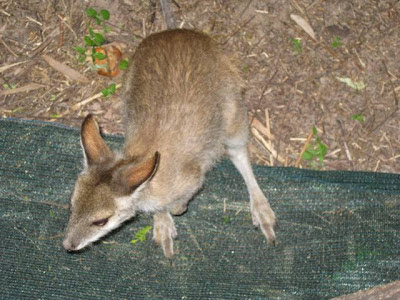 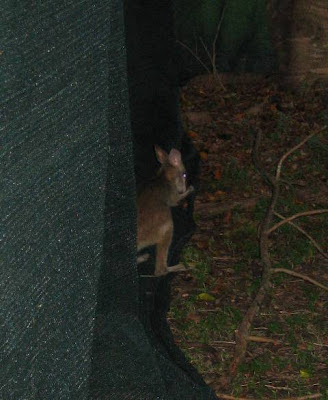 Unfortunately, I asked the bloke who slashed to come and slash just up near my house, the grass was getting long. I told him that the people next door were coming with horses and he didn't have to do the whole yard. I'd already had someone up the back with a horse which has damaged the back fence and I used to ask him to make sure he cut the grass across the gully and up by the back fence. I think he got his wires crossed this time 'cos the gully was dry and he was able to slash the whole block. Personally, I think he was so pleased to be able to get across the gully to slash the back that he just got carried away!)

Here are the two of them, the one on the right is grooming himself and the one on the left has just done a big "gallop" around the yard and is off again! 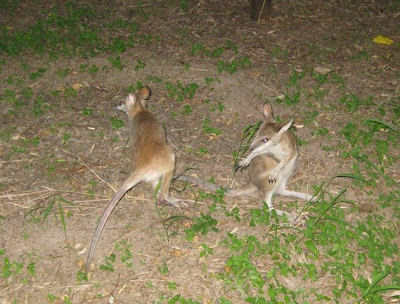 And this is just another photo of one of the wallabies that lived next door. Since then there have been two pinkies, that's ones which had no fur and were very young and sick and neither of them survived. 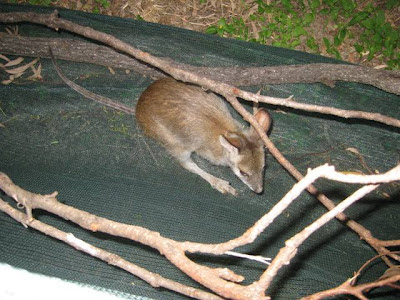 More later, I have to go horizontal!
Thrown at the page by kae at 11:32 PM

Just in time, young Kae. I was about to send out the posse.

Good to see you back!

Good to see you back and thank you enjoyed that.