About Australia's and Australian's dealings with China.

Glenn Milne said that we must not forget that China is a totalitarian regime, and we are shocked when something like this happens to bring us back to that realisation.

Your Shout was great. Farmers, country people, saying what they think of Rudd and his economic policy - and it wasn't at all flattering.

Paul Kelly: China has spent a lot of time and energy to demonstrate that its commercial interests are separate from the government; he says China is confusing state secrets with commerical-in-confidence information - I doubt that China is confused at all. It suits China to act this way, to make a point... China has treated Australia with a disrespect and disdain.
Kelly also says Rudd is in trouble over this.
Kelly speaks of the economic situation in Aus, we're doing well. The stimulus has worked.

Funny that. I thought it had something to do with the buoyant financial condition that the previous government left us in.


Talking Pictures, Patrick Cook summarises Rudd's G8 performance: Kevin, on the outside, nose pressed to the glass... Wearing the uniform, singing lustily with the team, but he never went on the field. 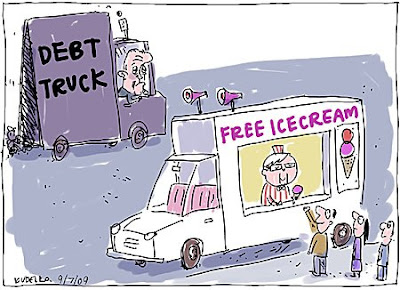 More Kudelka here at the Australian.
Thrown at the page by kae at 9:29 AM

Notable this morning was the contrast between Oakes's interview of the ALP minisiter on Ch 9, and Cassidy's interview of Bishop. The topic for both interviews was the very serious problem developing between China and Australia regarding the captured businessman. Oakes gently led the bumbling ALP bloke with a series of Dorothy Dixers and allowed him to put the blame on the consulate protocols set up by the Howard government. Had Cassidy interviewed him on the same topic, the mininster's credibility would have been destroyed.

Guinness Book of Records job with "Your Shout". First time ever the ABC has approached someone other than the ALP fan club for this segment of Insiders. Cattlemen are notoriously tough and shrewd businessmen, many are pretty wealthy as well, but have no doubt that inner city latte sippers will make fun of the big hats and slow speech, and declare them 'yokels'.

I am starting to get a (mature gentleman's) crush on Julie Bishop. Well spoken, impeccably dressed, sharp as a tack and repels verbal attacks with aplomb and dignity.

I think the affair started when she "cat scratched" Miz Gillard in Parliament.

I've got a Woman crush on Julie Bishop. I think she's great.